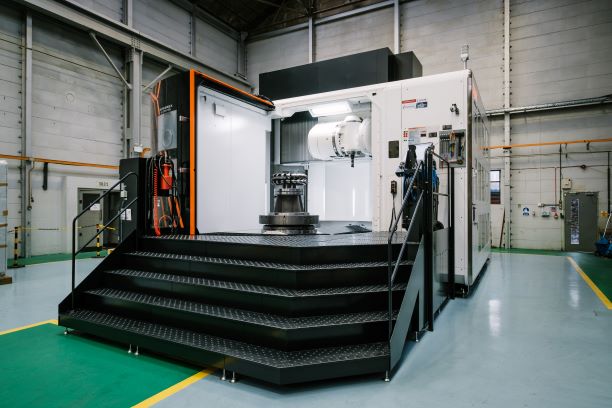 Founded in 1856, Kendal-based Gilbert Gilkes & Gordon Ltd (Gilkes) has long been at the forefront of the hydro-electric turbine and engine cooling pump market. The company’s pedigree stems from its explicit commitment to quality. However, when it comes to the manufacturing of turbine runners, quality has often come at a cost.

“Turbine runners are traditionally cast and polished by hand, a laborious task taking hundreds of man hours,” says Rebecca Sandham, Gilkes’ Head of Operations. “We have always had our own in-house machine shop, but have often had to subcontract the machining of runners, before finishing the process in-house. While this was a functional way of operating, deep down we knew it was also becoming limiting.”

Historically, the machining of a turbine runner resulted in one of the longest lead times of each project. With a view to increasing Gilkes’ competitiveness, in 2019, Rebecca set the challenge of fully machining a turbine runner from a solid billet of material, in-house, by the end of 2020.

She continues: “While the cost of subcontracting the machining of runners was undoubtedly a major factor in attempting to bring it in house, there were a number of other factors at play. From an intellectual property perspective, bringing all your key process and equipment under one roof has significant advantages. Likewise, we realised that if we wanted to challenge our production engineering department and reduce overall project lead times, we needed to scale-up our 5-axis machining capability.”

For the team at Gilkes, the main issue was not simply finding a machine tool that could replicate the subcontract services to manufacture the runners from solid, but also finding a machine supplier that would enable a truly collaborative approach.

Derek Thomas, Production Engineering Manager explains: “We approached a number of machine tool manufacturers who were more than capable of supplying us with a turnkey machining solution, but not many were able to afford us the level of involvement that we wanted. As this would be a new venture for us, we needed to ensure our own engineers could be heavily involved in the process, otherwise we’d have had to spend the next 12 months learning how to develop our next runner. In short, we wanted a partnership but not to become over-reliant.” 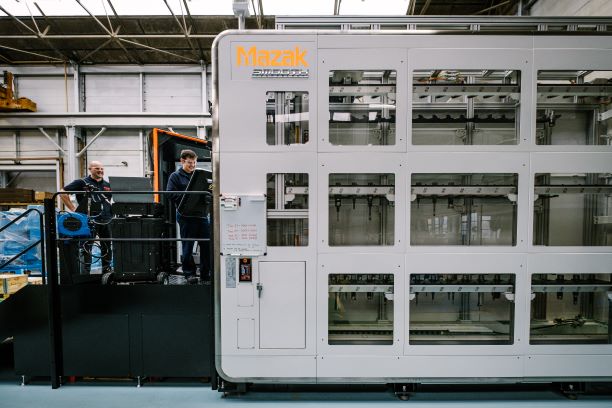 Among the companies that really stood out to Gilkes was machine tool manufacturer, Yamazaki Mazak. Rebecca continues: “While we hadn’t previously used Mazak machine tools, you could tell throughout the tender process that they really wanted to work with us. The fact the company had a UK base was also incredibly important, from both a training and applications support perspective.”

Following the completion of the tender process, Gilkes ordered an INTEGREX e-1250V/8 vertical Multi-Tasking machine, which was delivered and commissioned in early March 2020.

The e-1250V/8 is one of the largest machines in the Mazak range, designed for the 5-axis machining of complex large workpieces. The Multi-Tasking machine is capable of performing a variety of tasks that would normally be completed by multiple machines, including milling, turning, boring and drilling operations.

Rebecca continues: “We built a close relationship with Mazak following the machine installation. Mazak engineers were on site with us nearly every week throughout 2020 and, working alongside our other partners such as Brown & Holmes, Iscar, SolidCAM and VERICUT, we were quickly able to tackle any issues we faced. Specifically, we were able to collaboratively overcome the challenge of completely machining the runner without needing to finish off any hard-to-reach elements with subcontract spark erosion.”

Derek adds: “The practical training has ensured that we were able to lead on the programming for our first runner. Our engineers learnt how to use the software, how to verify the program and how to commission the machine. This means we’re in a position to programme a new runner within weeks, rather than months. This wouldn’t have been the case if we’d chosen a different machine tool partner.”

Despite the machine being installed just before the first UK lockdown, the disruption caused by COVID-19 only had minimal impact on Gilkes. As a result, in December 2020, the team was able to successfully complete Rebecca’s challenge, with the first Pelton runner fully machined on the e-1250V/8 being completed and delivered to a Hydro site. 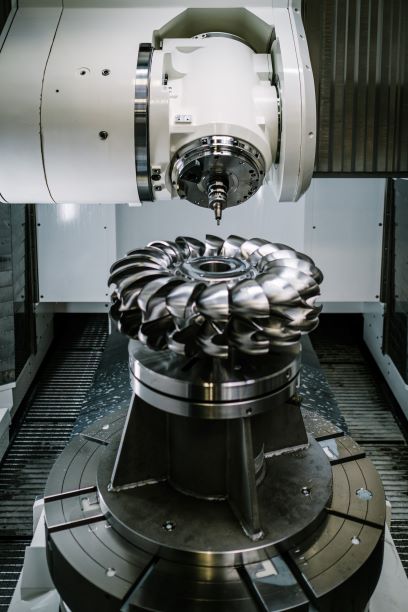 “Having the in-house capability, coupled with all the right people under one roof, has made a huge difference. With outsourced machining, if for some reason a design element isn’t feasible, resolving that problem and then going through the FEA process again can significantly add to an already lengthy lead time. The beauty of having the INTEGREX on site is that everyone can sit down right from the very beginning. If we see something the machine isn’t capable of achieving, then we can talk through the options and make changes much earlier, which in turn both reduces lead times and any duplicated activity.”

As well as using the e-1250V/8 for the manufacture of new runners, Gilkes has also benefitted from the flexibility and innovation that comes with owning a Mazak to deliver refurbishment projects in tight timescales. Derek continues: “In the past, when a customer requires refurbishment, we’ve had to subcontract the work out. This is both very expensive, and unpredictable as you are at the mercy of a supplier’s production schedules. Now we have the INTEGREX, we’ve been able to design a fixture which allows for single point accuracy fixturing.

“If a customer comes to us with urgent refurbishment, but we’re in the middle of a cycle on another runner, we can pause it, remove the runner, complete the machining, then put the original part back on to the INTEGREX and continue the cycle from within microns of where we left off. That kind of flexibility is invaluable.”

Looking to the future, Gilkes has already set its sights on expanding its in-house portfolio. Rebecca concludes: “The e-1250V/8 would have been able to process 82% of our historical forecast, which means the future is incredibly promising. Following the completion of our first Pelton runner, we will now be turning our attention to the manufacture of both Francis and Turgo runners. When you walk into the production department now, the excitement is contagious and the team are hungry to see what we can do next.”