Both machines have been specifically designed for high speed cutting, with the ability to channel increased beam density and laser energy into the cut, with a significantly shorter beam wavelength, approximately 90 per cent shorter than a CO2 laser beam wavelength.

Both machines are available in 2kW and 4kW versions and are capable of fast penetration of the workpiece material which offers the potential to increase productivity by more than 30 per cent, making the OPTIPLEX Series ideal for highly automated manufacturing environments.

The 3015 and the 4020 are equipped with a new Mazak Multicontrol Torch as standard equipment which offers beam diameter control, autofocus positioning and a protective window at a higher position to protect against contamination. The torch is also equipped with a number of automatic functions to reduce set-up time including an Auto Nozzle Changer, Auto Nozzle Cleaning and Auto Profiler Calibration which maintains a correct gap between the nozzle and the worksheet surface.

The 3015 and the 4020 are equipped with Mazatrol Preview 3 programming, which is 10% faster than the previous programming model due to the use of advanced hardware, greater tolerance control and features such as Active Vibration Control. Preview 3 also has number of advanced features including 3D display of the cutting path and automatic determination of processing conditions, including nozzle, feedrate, laser output for different materials and thicknesses. 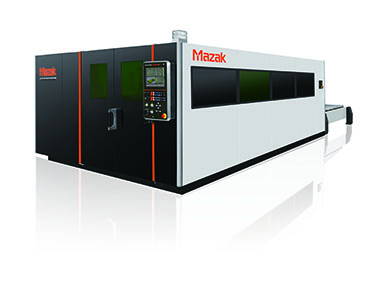 Both machines have been designed to be scalable post-installation with the use of automation, CELL SYSTEM or FMS, by the expansion of the material shelf capacity and management controller capability.

“Mazak’s Fiber Series now offers two sizes of machine in both 2kW and 4kW options capable of high speed and high efficiency cutting for a wider range of materials from steel and aluminium through to copper and brass. We are delighted to be launching the 4020 version at EuroBLECH and are confident the machine will be a major attraction for visitors to our stand.”