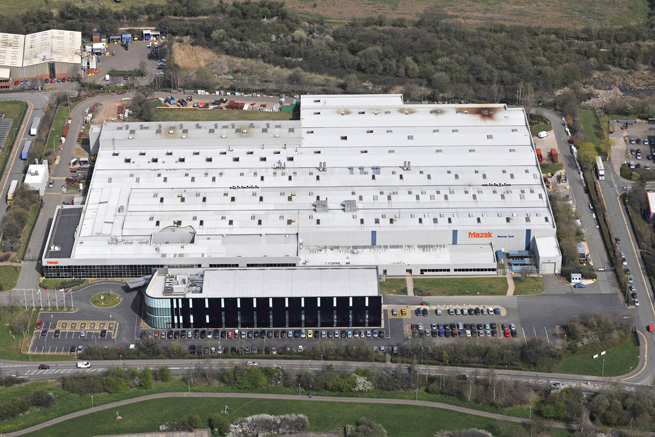 We believe one of the things that makes us a market leader is the uniqueness of our operation.

Our European Manufacturing Plant is not just a machine tool assembly plant. We pride ourselves in managing a
complete operation. We machine our castings, we make our own spindles, our own turrets, our own tool
magazines and our own sheet metal covers.

We’re committed to manufacturing in Europe and have continually invested in new machinery and equipment for
the factory since its opening in 1987.

1996 – Factory’s expansion
Expansion for the 21st century. In 1996 the Japanese Crane was adopted as the emblem for Mazak Europe,
symbolising long life and good fortune. The factory was extended by 9,000m2, enabling an increase in output of
50%, through an additional investment of £10m.

2001 – Cyber Factory
In 2001 a new £10m investment was made in the European factory's manufacturing facilities, and
the Cyber factory was created.

2007 – Increase of UK factory production
Further expansion to support European manufacturing: An additional investment of €15m was made between
2006–2007 to extend the factory to a new total 29,000m² floor space and to install new machinery. Factory output
increased to over 150 machine tools per month.

Yamazaki Mazak was chosen to represent British manufacturing at the Make it in Great Britain exhibition, which ran for the duration of the Olympic and Paralympic Games. Mazak, the only machine tool manufacturer to be represented, exhibited a QUICK TURN lathe, which demonstrated the role of the machine tool in modern manufacturing.

On the 6th of June, His Royal Highness visited for the first time Yamazaki Mazak’s European headquarters in Worcester, with the main purpose being to learn more about Mazak’s approach to manufacturing and the company’s commitment to developing young engineers.